Mike and Barry in front of a US map made out of computer parts.

As an example of the valuable contributions a corporation can make to digital inclusion, this profile highlights TechnoCycle’s community outreach program  which provides a free computer to incoming first graders attending Berry Elementary in North East Houston. The cost of providing internet access is underwritten by outside sponsors. Berry Elementary is an environmental science magnet school serving mostly economically disadvantaged students. The program started when Mike Buckles went to an environmental fair hosted by the school, presenting information about what TechnoCycle does. After talking with Lori Kelleher, the magnet coordinator, Mike said, “There must be more we can do together.” The company’s initial response was to donate to a SPARK park to help meet the local donation required for  matching funds.

In thinking about what more TechnoCycle could do, Mike proposed donating a computer for each of the first-graders to Mrs. Kelleher. His thought was that it would be most effective to introduce technology to the kids as early as possible. It was decided, and in the fall of 2012, TechnoCycle facilitated the first system give-away. All the hardware was donated by TechNip, one of TechnoCycle’s customers, and TechnoCycle refurbished the systems complete with Microsoft Windows and Office software through Microsoft’s Registered Refurbisher program. The families of the first-graders were wondering where the “catch” was, but there was none – they were given freely to the families receiving them. TechnoCycle was able to provide the systems with the help of its employees who volunteered their time through several sessions on a Saturday morning.  Each session explained the computers, had the families set them up, use them for a couple of minutes, then it was theirs. 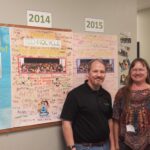 Mike and Katherine in front of thank-you posters from the schools.

They’ve continued doing that for five years, donating over 600 computers. As Mike said, “The challenge is to continue to keep the excitement in the program over time, and not let it become routine.”

They get calls from other schools wanting to know how they can get involved. Even with hardware donations from customers, it takes a significant amount of time and expense to collect, refurbish, and donate these systems to the families. In addition, all the labor on the donation weekends is volunteered and asking TechnoCycle employees to donate more time over multiple weekends would be too much. Since they don’t just donate the machines to an organization, but do the refurbishing and training, they go beyond what many companies do. It would be useful if other companies in the area could have a unified effort to address more of the need in the Houston area.

Mike gets a lot of satisfaction out of the donation process, as does the whole company. He started TechnoCycle nineteen years ago beginning in his home, and has doubled every three years, expanding to their current 60,000 square foot space. Being community-centered is one of TechnoCycle’s four core values, and philanthropy is very important to the company.

Some of the TechnoCycle’s customers have asked them to help with finding a ‘good use’ for donated systems. They want to benefit the community, but don’t know who to give computers to. They trust TechnoCycle to find a good use for functioning systems. This fits in with another core value of the company of “Stewardship”, as overseers of other’s property. They have the system to pick up equipment, recycle it, erase the data, prep it for reuse, etc.

The biggest challenge is figuring out how to fit supporting the school into normal operations. The logistics of imaging the machines requires extensive work. Balancing philanthropic efforts with the “normal everyday business” can be challenging. They also provide support for the machines by giving a year’s warranty through the school. Since it’s an informal partnership with the school, the school’s IT manager provides most of the support, answering questions, and swapping broken machines with one of the spares that TechnoCycle provides. Berry Elementary and the work they have done in support of the program has been a key part of its success. 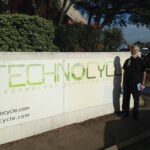 TechnoCycle has provided over 600 students the opportunity to access technology that so many people take for granted. This is an outstanding example of a company going the extra step to be a good community citizen.