For over ten years, the Indianapolis nonprofit Net Literacy has been run by teenagers, with the mantra of not letting well-intentioned adults get in the way of the students. Like their other programs, the summer Safe Connects internship program was suggested by the teen members of the board of directors. As the administrator put it, “Our secret sauce is the team leaders and veterans.”

Teamwork—we hear a lot about it, we know employers like experience with it, but how do economically-challenged teenagers gain potentially valuable experience in working on a team? 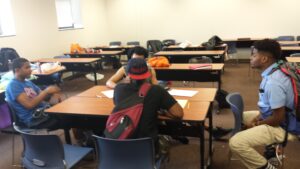 On a Thursday afternoon in July, Barry and Katherine had the opportunity to see the Safe Connects summer internship from Net Literacy (one of our partner agencies) in action. This is a six-week internship where (mainly) high-school students work in teams to produce videos on Internet Safety. In addition to learning about the consequences of online behavior, the students learn what it’s like to have a job, to work in teams, and the consequences of their actions. They are paid a stipend, and compete for bonuses for first, second, and third best video of the week.

Like in a real job, it’s possible to be fired due to being late, not contributing, or other non-professional behavior. Being let go from the program doesn’t have the life-damaging impact of being expelled from school, but can teach important lessons about consequences both to the students fired and the ones who remain in the program. The first week is intimidating, with lots to learn, but careful selection of the team make-up helps as do the team leaders, who are role models to the new students. In addition to the experienced team leaders, there are two floating mentors, two schoolteacher staff members, and the organizer.

The 2015 Summer program started with eight teams, and with attrition were down to seven when we visited in mid-July. Some of the videos we saw, as well as many others, can be found at Safeconnects.org. The site is used by teachers, after-school programs, parents and some teens and has 10,000-13,000 hits a month.

One of the guiding principles for this program, as for 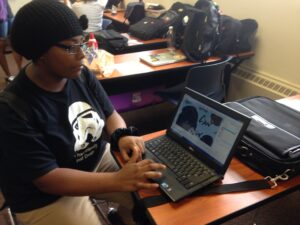 all the Net Literacy programs, is to let the students make the decisions. “Kids have the better vision on what is engaging and effective to their fellow teens.” The teams include one or two program veterans as well as an experienced team leader. The teams produce at least a video a week, more as they become more efficient. In addition to producing useful videos, the teens get experience in working in a small group. They learn each others’ strengths. During our visit, we saw videos in various stages of production including:

Some that are available for viewing include: 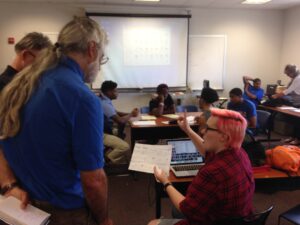 Several of the teenagers in the room suggested specific videos for us to see, making their pride in their work evident.

The program got started because teachers needed to teach Internet safety and didn’t know much about the topic, let alone how to teach it as a conversation, one that encouraged the teens to participate fully. By having videos produced by students, the material connects with other teenagers. Some videos are aimed at elementary school children, other at middle-schoolers, and some at the high-school/college level. It is a challenge to create videos about negative subjects that are positive. Net Literacy works with experts to get the language correct. For example, they don’t refer to a bullied person as a victim, instead they call them a target, to avoid taking away power from the person being bullied.

To help the participants learn about what it’s like to work in a real-life environment, they don’t pick their own teams. Plus, the program organizers have to balance veterans with new employees. One of the benefits is that the students learn about dealing with authority figures who may be on a first-name basis, unlike most teachers, but still are the boss. They also learn how to work with team leaders, and many have the experience of being team leaders. Half the team leaders are in high school and half are in college. One way to judge if a program is working well is if it easy to get veterans to come back. Safe Connects has no difficulties finding experienced team leaders each year. Another best practice is to try to improve year by year. Their 2015 program included a one-day training for team leads and mentors, which greatly helped cohesiveness. Don Kent works to accommodate schedules, especially for team leads, with filling in, job-sharing, etc.

We talked with a number of the teenagers, including at length with Mckenzie, a first-year student who learned about the program because her librarian pointed her to the videos at Safeconnects.org when she was doing a paper on bullying. Mckenzie’s initial storyboard read like an English class essay, and the administrator stopped her presentation, helped her see issues with it, and made her do it over. He takes pride in students viewing him sometimes as “unyielding, uncompromising, the meanest man around” but the students appreciation of his efforts was evident in the interactions we saw, as well as Don’s commitment to the program. He introduced us to every teenager by name, and mentioned exactly what they were working on. He also used our visit as an opportunity to give the teens experience with shaking hands, like meeting someone in a professional environment.

Now, Mckenzie is a storyboarding superstar, helping other groups with their storyboards. Her favorite parts of the program are storyboarding and finding locations. As she said, “When you find it, you can picture it all.”

Another sign of a good program is the enthusiasm of the sponsor. The number of teens who were referred to as superstars, the specific details about what they were good at, that Don knew everyone’s name and what their projects were. The visit was filled with phrases such as “You rock!” and “You’re cool.” It was inspiring to see.

Many of the teens who participate in one program become involved with other Net Literacy projects, and may even become a board member of Net Literacy. Each year, the board of directors, made up of over half teenagers, decides on the future priorities. Time and resource constraints mean that not everything can continue. 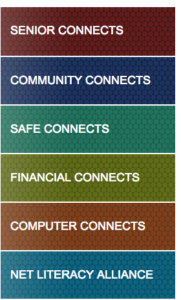 Since they have been around since 2003, Net Literacy has started a number of projects, as seen in the graphic. Their website has information about each program available at: http://www.netliteracy.org/about-us/

Katherine and Barry also toured a program that Net Literacy started and is now partnering with TeenWorks to refurbish 1850 computers over the summer at Broad Ripply Magnet High School. Students are paid to refurbish computers under the guidance of an adult with most of the computers being donated to the families of students without a computer at home. To date, Net Literacy has repurposed and donated over 34,000 computers. We took several pictures of the teenagers hard at work. 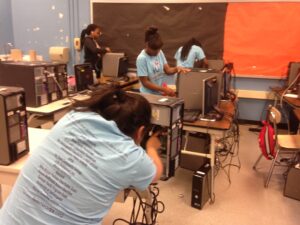 And some of the refurbished computers: 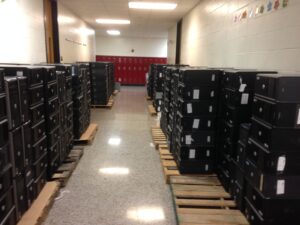 Net Literacy was started by a teenager, Dan Kent, and the volunteers are teenagers, and they are doing amazing things. Check them out at: http://www.netliteracy.org/ or look at the Safe Connects Videos at: http://www.safeconnects.org/

by: Katherine Lato (with contributions by Barry Glicklich)