While teaching high-school juniors at Sunday school, Robin Schultz discovered that one of his students didn’t have a computer at home. Since he had access to used computers through his computer-consulting business, he placed one in his student’s home. Realizing that other students also didn’t have computers, he started Learning To Be The Light http://www.learningtobethelight.org  in 2011 with Olivia Lenamond. Its mission is to ensure that eligible students in Hoover City, Alabama have the technological resources needed to succeed in today’s high-tech school environment.

We met with Robin Schultz from Learning To Be The Light (LTBTL) at a Starbucks in Hoover, Alabama. What was clear within a few minutes of conversation was how passionate Robin Schultz is about schooling, as evidenced by his continued high level of involvement with the local school board, which made the original location of the building used for their refurbishing extra-special. For years, LTBTL used part of the space for Artists on the Bluff which was located in what used to be an elementary school, one that Robin’s wife and his daughter had attended. When the building was going to be leveled, a local group proposed renting the building and using it to form an artist community.

LTBTL agreed to maintain the internet for Artists on the Bluff in exchange for a room. They got a huge room which meant they could take donations. As Robin said, “When we first started, we weren’t picky. We learned that people will dump their trash on you.” They moved LTBTL to a smaller room that was perfect for the next four years. They bought used shelves that hold medical files, which worked well for laptops.

In 2017, a new school superintendent decided that using a building for something that wasn’t school related wasn’t ethical. (It was more the artists part of things rather than the refurbishing.) Since they moved out of the building in January 2018, they now focus on laptops and working with Neighborhood Bridges. One of the biggest challenges is that students are not going to vocalize that they’re low-income, especially not when going to school with affluent peers. By partnering with Neighborhood Bridges, the counselor knows the recipient, no one else.

LTBTL is named after Newworldson’s song, “Learning To Be The Light,” which comes from Matthew 5:16. Challenges include collecting laptops and making students aware of their availability. Privacy guidelines prevent schools from releasing the names of students who are eligible for free or reduced lunch status, which is the pool LTBTL is addressing. 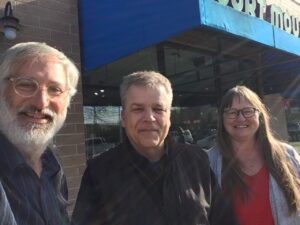 themselves. Teach them a skill where they can do that.” The problem of no access for low-income students has gone down since every student in Hoover from 3rd grade on up receives a Chromebook for during the school year. In Birmingham, kids don’t get Chromebooks. “We’re Hoover, we don’t follow precedent. We set it.”