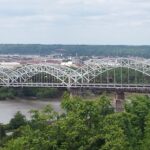 There are a lot of links in this material, we encourage you to explore the ones of most interest to you.

The National Digital Inclusion Alliance and the Kansas City Public Library welcomed digital inclusion practitioners, advocates, academics, Internet service providers and policymakers to Net Inclusion 2016. The agenda page lists the slides from particular sessions or they can be found here. The attendees included many libraries, non-profits, some vendors, policy-makers and a few refurbishers.

The National Digital Inclusion Summit began with participants choosing between a pre-conference workshop and four tours sponsored by the Gigabit City Summit. Katherine went to the first tour, Barry went to the third. 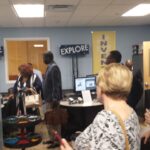 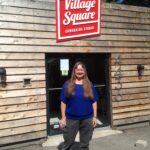 There were some great displays at the Google Fiber space: 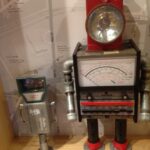 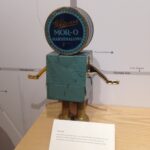 The keynote speaker, Gigi Sohn, Counselor to the Chairman of the Federal Communications Commission, gave interesting and factual information about where broadband connectivity has been and where it is heading. Lifeline had legal and economic issues, but due to recent efforts, millions of Americans will have expanded access. See Barry’s blog post about this topic. It takes verifying out of the providers’ hands to cut down on duplication and waste. There is a review mechanism because they don’t want waiting lists. They streamlined the process to become a Lifeline provider which should decrease prices and increase options. In response to a question about federal agencies working together, Sohn mentioned that the White House has established the Broadband Opportunity Council bringing executive agencies together. The FCC isn’t technically part of that but does participate.

Media Justice is a long-term vision to achieve racial equality, not separate from social and economic justice. Beyond digital inclusion and digital literacy, there are the digital justice principles. These include: access, participation, common ownership and healthy community.  As one of the panelists said, “Digital justice advances our ability to tell our own stories, as individuals and as communities.” All agreed that freedoms are intertwined. It is hard to have other freedoms without economic freedom.

Barry attended the workshop on Tracking Digital Equity: Measures and Metrics for Programs and Communities. Presenters included representatives of the cities of Seattle and Minneapolis. Both cities have dedicated personnel and plans to address digital inclusion. They can serve as models for other communities addressing these needs. One key takeaway for adoption is to share stories from people with similar backgrounds (cultural, economic).

Katherine attended a workshop on Increasing Digital Equity for Public Housing Residents: ConnectHome and Local Strategies. ConnectHome is a broadband adoption initiative of the U.S. Department of Housing & Urban Development. They have created a platform for public-private collaboration and locally-tailored solutions to narrow the digital divide for HUD-assisted residents and their school age children. It built on ConnectED and the President Obama’s other broadband initiatives. There is a White House Fact sheet on ConnectHome.

The panel included Aaron Wilkins of Human-IT, one of our partners. He discussed how they did outreach for their part of the ConnectHome. It required a lot of calls. They made 3,000 calls to get 1400 people. They had a number of no-shows, but walk-ins made up for that. Once they gave out the equipment, they had lots of calls for support, but many could be fixed via the housing support or the callers figured it out themselves. The partnership with Sprint was great. Lessons learned: ensure the ISP used has good reps and provides good service to the people receiving the devices. Technical support is different for different devices. It’s important to have pre-committed devices to give away.

Cleveland Connects gave away over 200 tablets and wifi. The program is focused on youth who attended after school programs. The program required the child and the parents to sign a pledge before receiving about $300 worth of equipment.

Common Sense Media provides advice to parents and educators about media. They are involved nationally with ConnectHome. Getting devices can be a challenge. The speaker recommends sustainability via federal/state appropriations. He also recommends a ‘volunteer corp’ for regular follow-up services with families that are getting equipment.

Barry attended Providing Technology Education for Digital Newcomers: Challenges and Solutions. Ken Charvoz led this session, which was in large part an effort to introduce his http://iconnect247.net platform. Ken has developed computer training courses for OASIS, a licensed platform with 40 courses used by many library systems. iConnect 24/7 is a platform for sharing training material for free. It is a work in progress which contains courses he has developed that range from ‘using a mouse’ through ‘MS Office certification’. Recognizing that software discussed in a course can change literally overnight, his site includes a blog, which he uses to address changes that have not been reflected in the course content. His intent is for the platform to serve as a forum for non-profits to share their training material. He wants everyone to use it as a resource.

Discussion within the group included:

The second day of the conference began with discussing National Digital Inclusion Alliance (NDIA) which includes organizations across the United States. Becoming an affiliate is free, and requires agreement with the principles. Subscribers (including PBDD) pay an annual fee and receive additional benefits. NDIA is a bridge between digital inclusion practitioners and policy makers. All the attendees were at tables and each table worked together on policy priorities for NDIA, then shared their items with the larger group. Barry and Katherine’s table discussed a number of specifics, including:

Katherine intended to go to the Learning Circles: Offline Learning session, but after signing up at p2pu.org, Peer 2 Peer University, she decided to explore setting one up later. It seems like a worthwhile endeavor with an open source toolkit for running learning circles. P2PU has found a much-higher success rate of people taking online classes in a learning circle instead of on their own.

Instead, she attended Information is Power: Better Broadband Adoption Data. From Pew Research Center – Broadband adoption has gone down from 70 – 67%. Have seen an increase in smartphone usage. Smartphone-only users increased from 8% in 2013 to 13% in 2015. NTIA, National Telecommunications & Information Administration has found that youth and older Americans are using the Internet more.

Barry attended a session on Low Cost Equipment where Jim Lynch of TechSoup provided an industry perspective, a recap of some information he had presented recently at an industry conference. With recent business cycles, he anticipates a large number of PCs coming available for refurbishing soon. He notes that twenty percent of the industry is non-profits, which is quite exceptional compared to most industries. Eighty percent of the market for US-refurbished computers is in the United States with the remaining twenty percent mostly wholesalers. Jim Lynch reported the issues with mobile devices (glued components, including batteries) which are a significant barrier to refurbishing, though he acknowledged that iFixit is providing information, helping identify tools and promoting the right-to-repair movement to address mobile device repair. In addition to assembling repair manuals for a wide variety of devices, iFixit has a put together a set of manuals on how to set up a refurbishing program.  Jim noted the trend away from on-premise (machine-hosted) applications and data, with more and more moving to the cloud. With regard to Windows 10, this is expected to be the “last” version of windows, with continual upgrades going forward. He anticipates that Windows 10 will be made available to refurbishers by mid-autumn.

Sam Drong of PCs for People, in Minneapolis, discussed their operation. With the processes they have in place, they have reduced the amount of technician time needed to refurbish a computer to fifteen minutes. They refurbish approximately 8500 computers per year. For the most part, they sell them for $30, $50, or $100 each, based on performance spec, though they do give some away for free. They provide repair service for $25. They also provide technology and connections for access to the Internet. They are working with both Mobile Beacon and Mobile Citizen, organizations which help non-profits provide digital connectivity.

Colleen Dixon of FreeGeek shared that they provide free open source computers and training to individuals in exchange for community service. They also provide computers to non-profit organizations. Most of the computers are sourced from local government. One interesting fact was that for institutional donations, 75% of the donations are reused, while for donations from individuals, only 25% can be reused.

Cari Delmariani of Kramden Institute shared their model. They provide computers to students in grades 3-12. The desktops are free, and they charge $100 for laptops, mostly for college-bound seniors. They also provide some for non-profits and some computers for adults through their literacy partners (e.g. Connect Home). They also provide technical support. Their refurbishing is done almost exclusively by volunteers, often in conjunction with corporate sponsored team-building programs, for which they also receive funds (Geek-a-thon).

Jim invited Bud Rizer of National Cristina Foundation to talk. He shared his organization’s background, the recent emphasis on adding refurbisher partners, and his plans to launch AFTRR in June. I mentioned PBDD, and working with Bud, and he recommended the training material we have on our site.

Bob Holcombe of GSA discussed programs whereby the government issues computers (and other equipment) for reuse. In addition to sales, he shared information about http://www.nasasp.org/ (National Association of State Agencies for Surplus Property), which donates equipment. He also talked about Executive Order 12999, which directs the federal government to donate to organizations involved in research, including schools, and highlighted the opportunities that may be available through that program.

Over lunch, NDIA members had the opportunity to present an overview of their organization during a lightning round, three minutes and five slides per organization.Katherine presented on PBDD, finishing a presentation of the services we provide with a message to “Use us.” Slides (with notes) are available at: pbdd-may-2016.

Google Fiber sponsored the Wednesday evening get-together with food and drink. We were excited to be going to a Google office party. 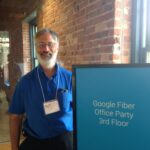 We look forward to seeing what NDIA does over the next year to connect digital inclusion organizations and to influence policy at the local, state and federal level. We encourage our partners to join NDIA, engage with them, and consider attending future conferences. 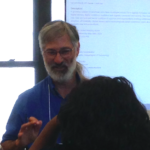 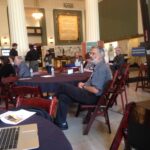 This entry was posted in Newsletter. Bookmark the permalink.